We started off with Howie Rose doing emcee work. 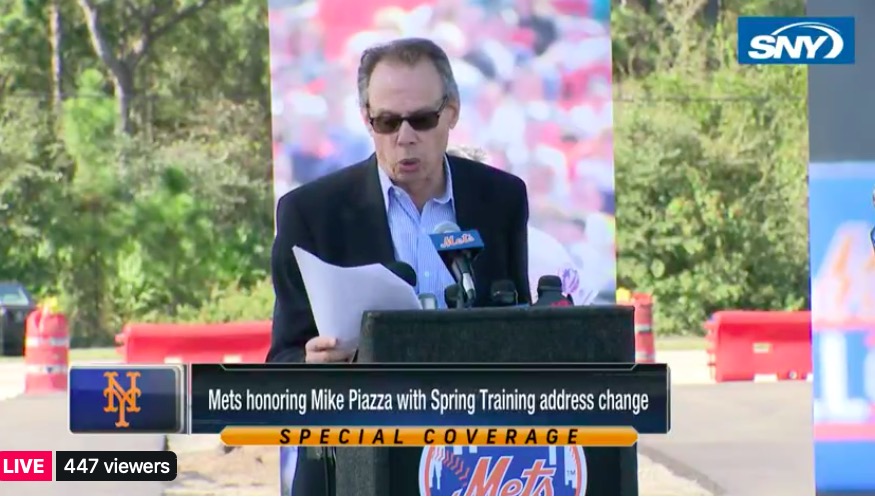 Then a local commissioner spoke.  He wasn’t up to the task.  Won’t dwell on him.

Then this mayor showed up, he was fun. 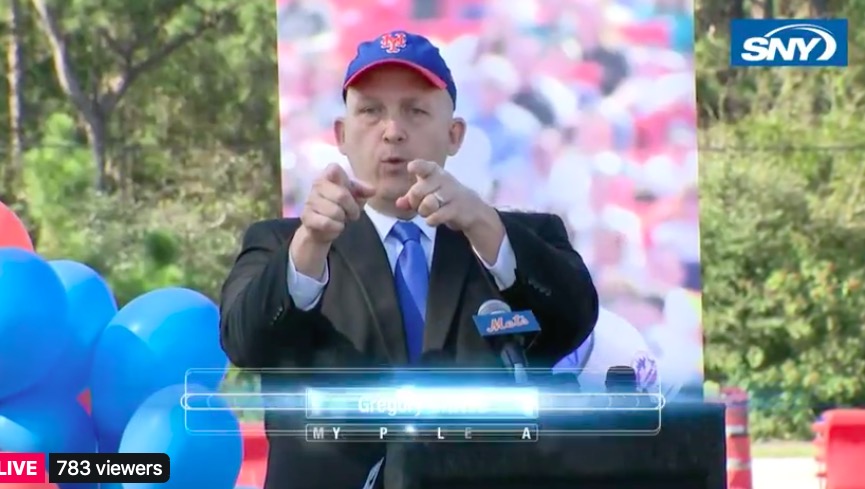 And he went full “I am a character on the Office” and made a joke about playing with PIZZAZ because PIZZAZ PIAZZA get it? 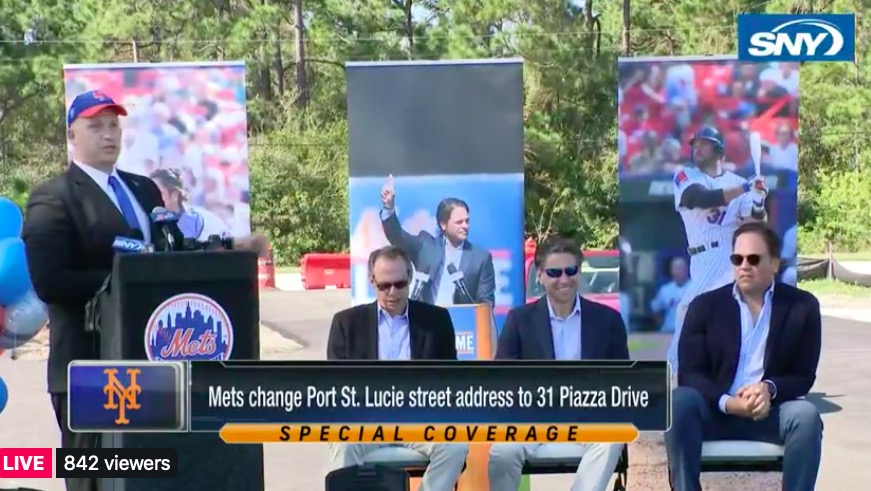 The Mayor then said that “the announcer” did a good job.  Good old whatshisname sitting there with Jeff and Mike.  Love The Announcer.  The Mayor is True Blue and Orange.

Then Jeff spoke…he had notes. 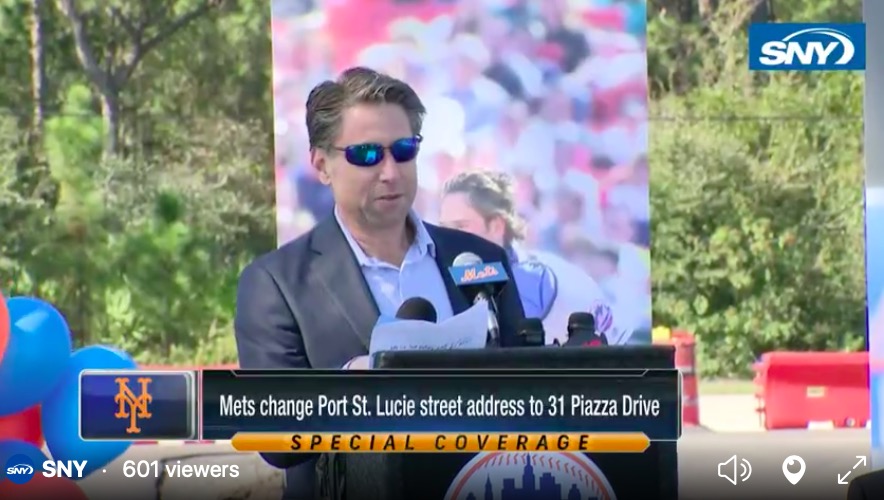 Jeff enjoys eating dinners with Mike and talking about golf and soccer with Mike.

And then this.  I mean how exciting? 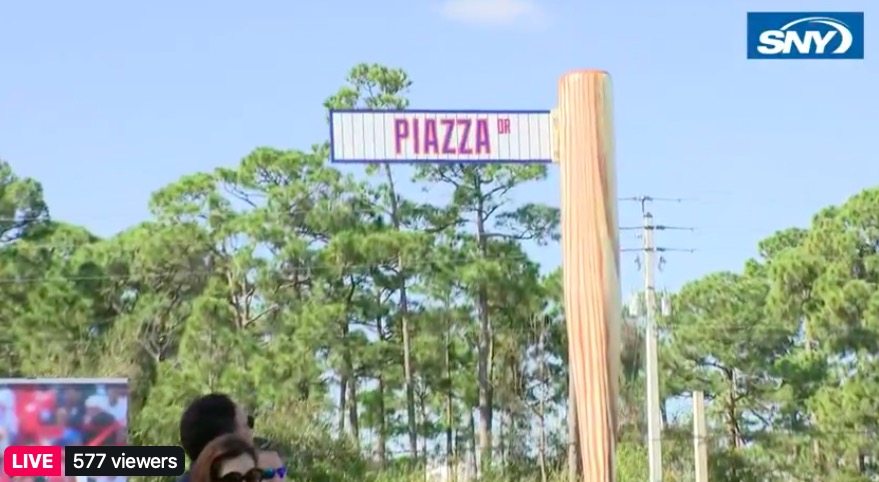 Then someone named Mike Piazza spoke.  He talked about being an Ambassador for the team and gave an nice thankful speech. 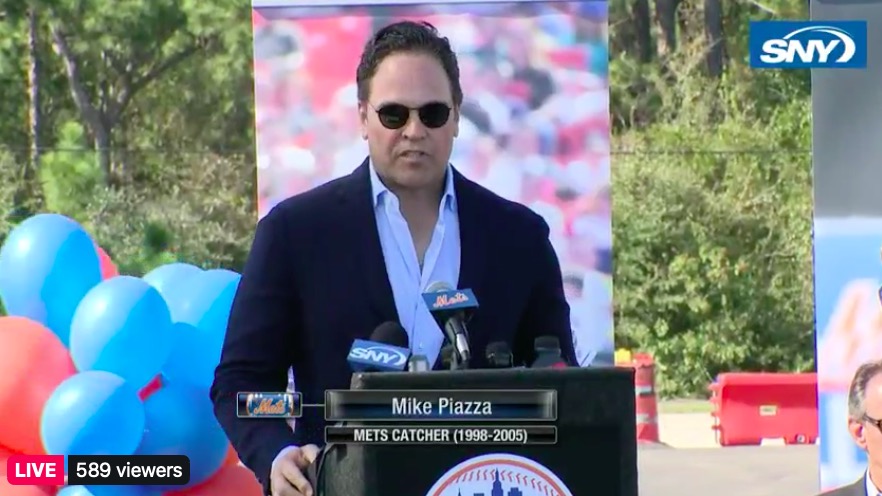 FLUSHING, N.Y., January 16, 2020 – Moments ago, the New York Mets, the City of Port St. Lucie and St. Lucie County honored Hall of Famer Mike Piazza by renaming the street formerly known as NW Stadium Dr. to Piazza Drive and changing the official address of the Mets Spring Training facility to 31 Piazza Drive. Mets COO Jeff Wilpon along with Piazza announced the change in a ceremony in front of Clover Park.

“We are thrilled to celebrate Mike and his contributions to the organization with this honor,” said Mets COO Jeff Wilpon. “Mike is an integral part of our franchise’s history and he will forever be enshrined in our home away from home in Port St. Lucie. We would like to thank the City of Port St. Lucie and St. Lucie County for their help in making this happen.”

“I am extremely excited that the Mets Spring Training home address and street name will be renamed in my honor,” Piazza said. “Port St Lucie will always hold a special place in my career as the place where I prepared for some of my most memorable seasons, with teammates, staff and of course fans. Florida has been my home for the past thirty years so it’s great tribute for my family and for future generations. I am truly touched and blessed. My sincere thanks to the Mets, Fred and Jeff Wilpon, St. Lucie County and Mets fans everywhere!”

The Mets previously honored Piazza by retiring his uniform number, 31, in 2016 and inducting him into the team’s Hall of Fame in 2013. He was elected to the National Baseball Hall of Fame in 2016. His 396 home runs as a catcher remains a major league record.

Piazza spent eight years with the Mets from 1998-2005 and ranks first in team history in slugging percentage (.542), third in homers (220) and OPS (.915) and third in RBI (655). His iconic home run in the first game back from the 9/11 attacks helped lift the spirts of New York City. Piazza represented the Mets at the All-Star Game seven times. Overall, the Hall of Famer hit .308 with 427 home runs and 1,335 RBI during his 16-year player career. He was selected to the All-Star team 12 times in his career, was twice the runner up in the National League MVP voting and earned NL Rookie of the Year honors in 1993.