Being GM of a Major League team is more than just running the top club, it’s also about evaluating talent throughout the organization, including making not just the blockbuster deal, but the smaller deals that may take a few years to play out.
As part of an ongoing series here at The Mets Police, we will look at how trades the Mets have made in the past ultimately played out, paying particular attention to the non-blockbuster deals that are a true measure of evaluating raw talent.
This past Monday the Mets (technically their AAA affiliate the Norfolk T….er…I mean the New Orleans Zephyrs) released OF Ben Johnson. On November 15, 2006 Johnson was acquired by the Mets along with Joe Adkins from the San Diego Padres for relievers Heath Bell and Royce Ring.
Johnson struggled to stay healthy during his time with the Mets, spending most of his time on the DL. Adkins was allowed to become a minor league free agent following a so-so 2007 season. This year with the Louisvilel Bats (Reds AAA) he is 0-1 with a 0.95 ERA in 19 IP.
Meanwhile Bell has become a top reliever, appearing in 97 games for the Padres, throwing 111 innings with an ERA of 2.10 and 113 strikeouts (with just 35 walks). Ring was traded by the Padres midway through 2007 to the Braves.
At the time this trade seeemd odd – trading 2 relievers (including a lefty) for a so-so OF and another reliever. In hindsight, well, the numbers tell the story.
Thanks to the Mets Minor League Report for pointing this out
Please visit www.metspolice.com and help stop black uniforms.

Calm down, it’s a slow day and this is a cool video of Keith Olbermann touring New Yankee Stadium.

The Wilpon family has owned the Dodgers since the 1940’s, and this marks their 50th and final season at Shea Stadium before they move into the new Citi Field which will honor the history of the Dodgers and the great Jackie Robinson.

Wilpon was sad that the Dodgers lost to the team from the Polo Grounds but was consoled that Dem Bums took two of three.

After the game someone tried to tell Wilpon that the Dodgers skipped town 50 years ago and the Mets have their own history (and that Jackie Robinson never played for the Mets) but he would have none of it. 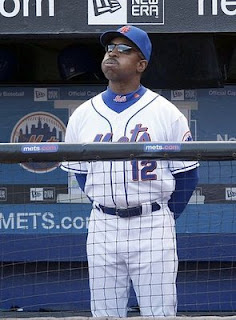 Quiet day. In Newsday today…
And if it feels like the Yankees, Red Sox and Mets play the longest games of all … you’re not imagining things. According to the Elias Sports Bureau, the Red Sox are the biggest offenders, at 3:08. Then come the Yankees, at 3:06. And the Mets top the National League at 3:01.
The Red Sox and Yankees both field lineups that emphasize selectivity at the plate. The Mets? I guess the lack of long outings by the starting pitcher leads to multiple pitching changes by Willie Randolph.
http://www.newsday.com/sports/baseball/ny-spdavidoff0508,0,6568687.column
Please visit www.metspolice.com and help stop black uniforms.

Continuing with our theme of Santana & Maine and pray for rain…..we’ll get Rain on Friday which is good (instead of Pelfrey), Pelfrey and Santana for Saturday’s doubleheader so that’s a split, and Perez vs Johnny Cueto on Sunday – Perez is due for a great game….so the Mets Police predict the Mets take two of three, and the Reds lose their heads (see below)

Why buy tickets when you could have a nice TV?