I’m not going to kill MetsBlog.com if the reporting is accurate on this. We’d all like to get our words out there. Personally I’m not quitting until the Mets hire me as Director of Franchise Integrity. Anyways here’s Raissman in today’s News:

Is Matt Cerrone‘s entertaining and informative MetsBlog.com (One Team, One Million GM’s) losing some edge – and independence?
Prior to the start of the season, Cerrone joined forces with the Mets and SportsNet New York in a deal to have MetsBlog.com appear on SNY’s Web site. This was followed by a lot of yap-flapping out of Metsville (and MetsBlog) about MetsBlog being able to continue doing its thing.
On Thursday, MetsBlog posted a YouTube video of Joe Smith going mouth-to-mouth (“You ain’t s— … I’m in the big leagues you idiot”) with Cubs fans. Spies say when a Mets official was made aware of the video’s presence, he had it immediately pulled off MetsBlog.
For MetsBlog, and its fans, that’s called livin’ in a corporate world. 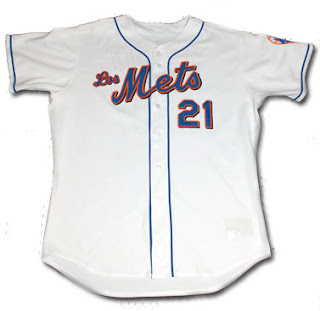 Come on.
Did they really think there were some spanish speaking people who were suddenly going to become Mets fan because they added the word “Los” in three inch letters?
This looks horrible.
Reminds me of when they decided to market to Japan – opening day at 5am, Shinjo and that guy that was “the Japanese Greg Maddux.” (Why sign the real Greg Maddux when you can get the Japanese version.)
If you’re going to do it, go all in like the Brewers did. 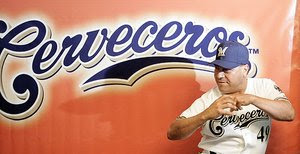 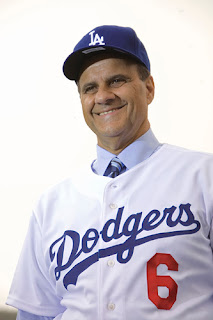 Oops wrong team, that’s someone else.
Wait..you mean there’s a way to renovate a stadium and make it cool? No way!

LOS ANGELES — The Los Angeles Dodgers unveiled a four-year upgrade plan for Dodger Stadium on Thursday that owner Frank McCourt said amounts to a new home for the team built around the nearly 50-year-old core of the old.

The plan includes a tree-lined entrance to a landscaped grand plaza beyond center field that will connect to a promenade of restaurants, shops and a Dodgers museum.
Acres of parking around the stadium will be turned into a perimeter walkway, which the team is calling “the green necklace,” allowing fans to move outdoors around the ballpark while inside the gates.
One plaza will have views encompassing downtown, the Pacific Ocean and mountains.
“We’re creating a new stadium without tearing down the old,” McCourt said in a statement. “That may take more effort and more resources, but we’re talking about Dodger Stadium.”

It’s all planned to be completed by opening day in 2012, with a price tag of about $500 million, according to a news release from Mayor Antonio Villaraigosa’s office.

The changes require approval from the city council, expected to be a formality.
The announcement should help bring an end to speculation about a new stadium for the Dodgers, which had increased as more of the stadiums of the 1960s are torn down for newer, more neoclassical venues.
“We are very pleased to see the Dodgers commit to remain at a ‘new’ Dodger Stadium,” baseball commissioner Bud Selig said in a statement.
The Dodgers summarized the changes for community groups and season ticket holders earlier in the week, and formally announced the facelift Thursday at a news conference.
The stadium, in use since 1962, will be the third oldest in Major League Baseball after the New York Yankees move to their new home next year. Only Boston’s Fenway Park and Chicago’s Wrigley Field will be older.
This is the fifth phase of renovations since McCourt and his wife Jamie purchased the Dodgers in 2004.
Please visit www.metspolice.com and help stop black uniforms. 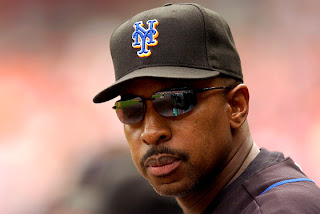 Another Grand Performance From Willie’s Guys

“He’s my guy. I stick with my guys.”
I’m sure there’s no need for me to reveal the source of that quote. After all we’ve been hearing those same words day after day for over a year now.
You can’t fault a manager for showing confidence in his players, but at some point you have to draw a distinction between performances that most often lead to wins and those that lead to losses. I have two questions for Willie about last nights embarrassing loss.

1. Why would you bring in Aaron Heilman to pitch in the sixth inning of a tie game with two runners on base after being burned by him three times already so early in the season?

2. Why would you stick with him after he walked Lastings Milledge to load the bases?
It has often been said that those who fail to learn from history are doomed to repeat it. Hasn’t there been enough history on Aaron Heilman to know that he is clearly ineffective so far this season? It doesn’t take a rocket scientist to see that his fastballs are all up and he is relying to much on a changeup that lost its potency because he throws it too many times in the count.
What are we paying Rick Peterson for? Is there one pitcher you can name that has shown any improvement from last season? Why are John Maine and Oliver Perez still the same promising pitchers with the same lack of focus and inability to work deep into a game?

Am I the only one who thinks Heilman should have gotten the hook after he walked Lastings Milledge? Especially after seeing that scorching laser he drove down the left field line that just missed being a bases clearing double. Knowing how poorly Heilman has performed of late, shouldn’t have Joe Smith and Scott Schoeneweis have already been throwing in the bullpen and on call for the first hint of trouble?

I don’t know about you, but as far as I am concerned Joe Smith, Duaner Sanchez and Scott Schoeneweis are the only guys I trust in that bullpen after Billy Wagner.
Last night Gary Cohen revealed that the Mets’ bullpen have allowed three of the four grand slams hit so far this season. Pathetic…
When will it be time to usher in the Eddie Kunz era? Kunz is our top relief prospect and closer of the future. Obviously it’s too early to claim the mantra of closer of the future, but it may be the perfect time for “the reliever who can throw strikes of the future”.
With ERA’s hovering around 7.00, can Eddie Kunz do any worse. Maybe I’m just talking out of frustration. Maybe I’m just tired of seeing the same guys get trotted out there and blowing would-be wins for us. Maybe I’m just tired…
Please visit www.metspolice.com and help stop black uniforms.