Quiet Day. Leave Delgado alone. If you were going to bitch about Delgado you should have bitched when they made yet another free agent signing to replace a home grown player (Mike Jacobs).

Anyways, there’s a movie about Bobby Valentine coming out on May 13th and since it’s a quiet day, I’ll share. Bobby was the king of finishing second when he was in America.

Three excerpts from Bob Klapisch in The Record…..right on par with The Mets Police: Willie does nothing and the SS is Over-Reyes.
The entire piece is here
http://www.northjersey.com/sports/18310414.html
One person familiar with Fred and Jeff Wilpon’s philosophy says “the honeymoon is over” for both the manager and general manager. That means the Mets have to do more than simply remain competitive with a mediocre field in the National League. With a $140 million payroll, the Mets should be good enough to run away from the rest of the East; that’s the consensus from the franchise’s highest echelons. That’s why a win over the Braves was symbolically important to the Mets, because it reminded everyone in the clubhouse what efficient baseball feels like.
Randolph initially won over the Wilpons not as a tactical genius (he’s not), but as a master motivator: street smart, tutored by Joe Torre and Billy Martin, able to speak the language of his players. But Randolph is detached, if not aloof, and his toughness has morphed into a joylessness that’s been rubbing off on the Mets for more than a year now. They’re just three games over .500 since May 19, which suggests something is wrong about the culture in the clubhouse.

Jose Reyes is one of the Mets’ problems: His average fell to .237 after he went hitless in four at-bats against Atlanta, and he is starting to hear steady boos from the Shea crowd. Whether or not Randolph can reach his shortstop â€” he couldn’t last year during September’s collapse â€” may well determine his job security.
Please visit www.metspolice.com and help stop black uniforms.

Hey Mets – this is why you need a Director of Franchise Integrity. Did you speak with anyone with children before scheduling this? Kids have this thing called school that takes place on April Wednesdays.

FLUSHING — CYBERCHASE, the Emmy award-winning math mystery cartoon series on PBS KIDS GO! and the New York Mets today announced the second CYBERCHASE Day at Shea, Wednesday, April 30, when the Mets host the Pirates. Harry, host of CYBERCHASE For Real, and his wacky cyberbird pal Digit will join Mr. Met to kick things off live on the diamond at 11:00 a.m. followed by special kids’ programming before the game which starts at 1:10 p.m. 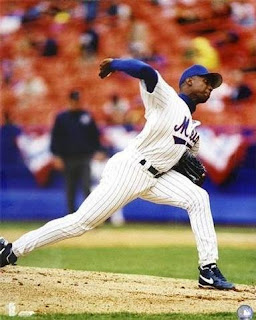 Willie Randolph will you whatever he needs to tell you to justify staying positive. If he needs to sanitize this Mets mess by euphemizing all of the critically-ill aspects of his ballclub, then let him do so.Its his job to lose, not mine.